Thirty years of experience in film and broadcast television sound production and post production in Australia means you can be confident in the experience and quality we provide.

The range of programs include film and television drama productions

Our services include VO recording, sound design, sound editing and sound mixing in mono, stereo and surround formats up to 7.1

An example of our award winning sound design and mixing is the 30 minute short feature film Death's Requiem, produced in 5.1 surround and mastered in Dolby Digital in our studio, for which Stephen Hope won the Best Achievement in Sound for a Short Film from the Australian Screen Sound Guild. 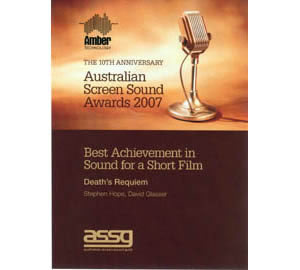 Death's Requiem (stereo version) can be viewed in the Gallery

We also provide freelance services to the post production industry and television in their own facilities.